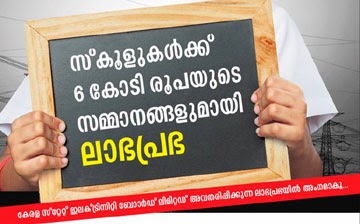 The Kerala State Electricity Board (KSEB) has announced prizes worth Rs 6 crore for schools participating in the ‘Labhaprabha’ energy conservation scheme.This scheme is meant for domestic consumers and promises gifts and other incentives for saving electricity.The KSEB is focusing on school students to spread the message of energy conservation and has announced 5 KW grid-connected solar power units for 10 schools in each district, which will cost the KSEB Rs 6 crore. The students in turn should encourage their parents to register in the scheme by sending the SMS KSEB

Schools will be considered for the prize if the total consumption of the houses of students come down by 20 per cent. Ten schools each in the districts stand to win a 5 KW solar power unit. The teacher coordinator of the programme in each prize-winning school stands to win a solar lantern. Schools that save a large volume of energy but do not win the prize will be partly funded by the Kerala State Electricity Board for installing the 5 KW grid-connected solar power unit.

Photo Courtesy : Kerala Electricity Board Facebook Page
PSMVHSS Kattoor, Thrissur
To avoid SPAM comments, all comments will be moderated before being displayed.