We are making major changes to this site. Reach us if you are facing any issue by clicking on Report. Report

CRC@20- The Right to Education 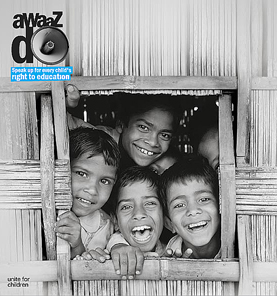 The Article 28 of the Convention on the Rights of the Child (CRC) states that every child has the right to a primary education, which should be free.
The Convention places a high value on education and states that young people should be encouraged to reach the highest level of education of which they are capable. Wealthy countries should help poorer countries achieve this right." (Article 28 of CRC)

Over the last sixty years, has made significant progress towards ensuring that quality education is available for all the children in the country.

The act specifies free and compulsory education to children aged between 6 to 14 years. The act also outlines the minimum norms in government schools and prohibits physical punishment and mental harassment of all the children.

The act confirms to the right to education that is enshrined in the CRC to which the Government of India is a signatory. It also states that learning environments should respect children’s rights and discipline in school should be administered in a manner consistent with a child’s dignity.
Features

Isolated Islanders Support Schools to Educate Their Children Closer to Home
UNICEF partnered with an NGO, the Centre for North East Studies and Policy Research (C-NES) and the Government to provide technical support for the education initiative realizing it was the best way to reach isolated communities who otherwise would not have access to basic educational services.
Community radio connects, educates and entertains in rural India
Residents of Shivpuri, located in ’s , turned out in force for the recent launch of the station, which will broadcast to scores of villages in a 15-kilometre radius of the city.
Calling Girls Back to School
An innovative educational concept, RBC has been designed to assist the mainstreaming of selected ‘out of school girls’ between the age of 11-14 years.

Beyond Closed Doors: A Community Fights Back to Send their Children to School
One man’s conviction and his community’s support is helping children go to school instead of work in Andhra Pradesh.

Giving Girls Back Their Right : Bridge Schools in Rural Andhra Pradesh
school centres and girls collectives are reshaping the future of a generation in rural Andhra Pradesh.
Jyoti’s Story of Courage, Determination
She continues to put in her best, in sports and studies and has started dreaming once again of a future for herself. She wants to put the past behind her and move on.

To avoid SPAM comments, all comments will be moderated before being displayed.